Jessica Hynes is turning on the creative quarter's Christmas lights

Jessica Hynes is turning on the creative quarter's Christmas lights 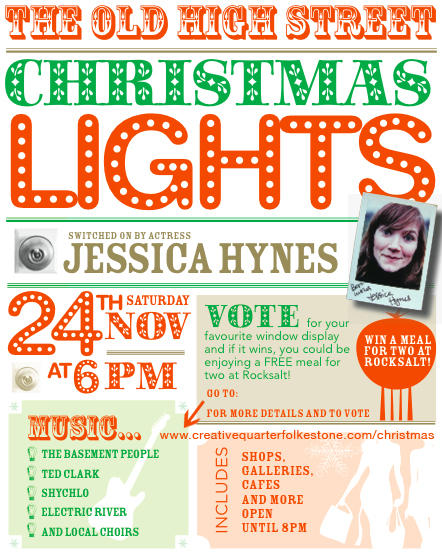 24th November, just in case that image there does not load...

Jessica Hynes is also known as Jessica Stevenson (@jeffica) she was in Asylum and Spaced plus more modern comedy things.

This is my site The 'Gerald that I built in a fury of excitement when I first came to Folkestone in approximately '04. I'd been a frequent visitor for a while before that so I am technically one of those Down From Londons you get nowadays. The site was a lot more dynamic with a gig calendar and voting for best venues and stuff, and I know it was a useful reference for others who were thinking of moving to the area. Now I've moved out of Folkestone again (though only to Hythe) it doesn't get as much attention as it used to. Ironic really as The town is now becoming the exciting place we always thought it was just about to. I am not Gerald BTW, this comes from a fake paper in an episode of Brasseye or something, the Portsmouth Gerald, and how there is a local newspaper here called the Folkestone Herald. Puns like this are great aren't they? Do contact me if you have something to offer, email anythign @ this domain, or try @folkestone or @pauly on Twitter.